I had a few complaints about my first blog post. While admittedly terrible (you have to start somewhere and the benefit of starting terribly is room for improvement) the main complaint was historical innaccuracy. This post is to correct that. This is the story of how I found myself in Japan.

This is Tim.I had the joy of working with Tim on a reelection campaign for several local and statewide candidates that shall remain nameless, mostly because of these photos.

It was the kind of job where you meet dedicated, interesting people, and end up crying in front of them when the printer runs out of paper at  midnight and you haven’t finished your walk packets for your group of 9 am volunteers, or you hold off on going to the hospital because you have to finish phonebanking during call time. It was my first job after college, working on a cause I felt passionate about, and I had never been so challenged in my life. I wanted to prove to myself that I was up to it. I can’t count how many times I cried in this office due to things that, in retrospect, were not the end of the world. Tim generally remained calm in these kinds of emergencies and was able to defuse the situation. Sometimes by sleeping through it.

When Tim wasn’t sleeping or getting locked out of the office, he told us stories about living and working in Japan, where he had just returned from. I had known for a long time that I wanted to live abroad for part of my life. It was the specifics that eluded me, and the timing always felt off. I found it easy to make excuses not to make the leap. When I decided last year that it was now or never, Tim was a really encouraging resource, giving me information when I asked and pushing me if I started backing out for dumb reasons. It took a few years, but I made the jump, partially due to his encouragement.

That’s the story. I mostly wanted an excuse to unload some of these beautiful photos that have remained hidden on my hard drive for far too long.

We swept almost every race, by the way.

to my new apartment in Chiba this afternoon.

A few times this past week I have been struck by a sense of self-satisfied accomplishment. “This wasn’t so bad! In fact, this is fantastic. Why did I think this was going to be hard?”

Then I remember that I have been living in this country (which is putting it generously at this early stage) less than one week, and when I tried to buy cinnamon cereal it turned out to be dried pork rinds, which was almost enough to make me cry. It’s a bit early to be patting myself on the back for boldly exploring unclaimed territory that is actually just someone else’s very explored, very much claimed backyard. (being brave enough to live for a year where other people already thrive? I think that’s the brilliant concept behind Survivor.) The only thing worth being proud of is my exponential mastery of the Japanese language. I did the calculations on paper, and if I only spoke 3 words before, then my previous statement is mathematically accurate.

After “sumimasen”, the most useful and frequently used sentence I have learned has been “inuo sawate e deska?” which is roughly “can I touch the dog?” Needless to say, this was was game changing for me. Last night, celebrating the end of teacher training in Shinjuku, I ran into a couple (well more accurately, ran at a couple) walking a French bulldog. While loudly chanting SUMIMASEN SUMIMASEN and pulling my shirt out towards them like a tent (I was wearing a french bulldog t-shirt and thought that illustrating I had all of the proper credentials and licensing to pet their dog might reassure them) could have been an insalvagable situation, except for the mastery of that single sentence, which they seemed amused by and laughed heartily at.
Now seems like a great time to mention that laughter is occaisionally how people deal with discomfort or nervousness in many parts of Asia.

Language mastery aside, it hasn’t been nearly as much of a culture shock as I expected. I assumed it would be like jumping into a cold pool- quick, shocking, and extremely obvious, but wearing off over time as I adjusted. instead, it’s like being in a slowly boiling pan of water. I won’t be thinking of anything in particular and then something wil happen to make me remember that I am functionally illiterate and can’t speak to most people above the level of party charades and suddenly I realize I’m not in Kansas anymore.

A few things I’ve noticed in no particular order 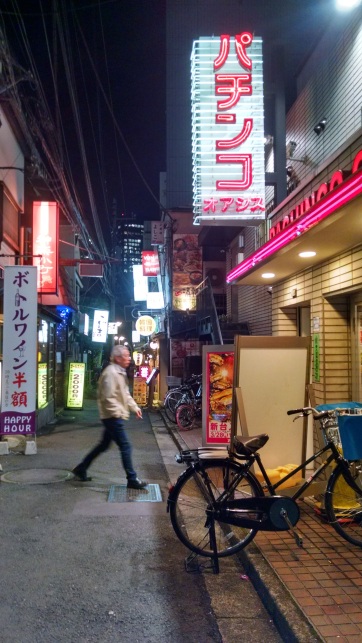 Here is a bicycle parked in an alleyway off a busy street in Tokyo. 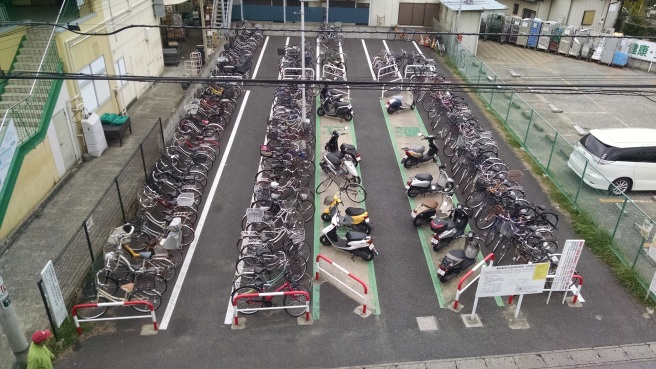 Here is a bicycle parking lot near  train station. They are not locked. as far as I can tell, NOT ONE OF THE BICYCYLES IN TOKYO IS LOCKED. The first few days I couldn’t even compute this.  I would see it and my brain would force reboot until I looked away. I asked the trainers, who shrugged it off and said many people don’t bother locking them up. Bicycle theift exists here (apparently bicycle and umbrella theft make up the bulk of crime in Tokyo, according to my experience)This knowledge goes against everything I know about the world and my place in it. If you have something and put it down, all bets are off.

It isn’t just bicycles. On my way to sign a lease for my apartment, I took the train with a company representative. My bag kept getting in the way of exiting passengers (yes, I was that person, yes I am deeply sorry). The representative helping me move suggested that I leave my bags by the door, out of the way, while we sat several seats away.

And no one even looked at it. Even aside from the theft aspect, a lone bag on a train somewhere in the United States would immediately be swept up as suspicious. but people walked past it, careful both not to bump into it or acknowledge that it was there. Again, not something I could ever see happening where I am from, or even in most places I have been. In a city as large as Tokyo and a country as small as Japan, much of social norm seems to be just about coping with living with a large number of people.

… if they require you use Comic Sans?

After training today, took a different exit from the building and walked along the river, trying to get lost so that I could find my way back again. 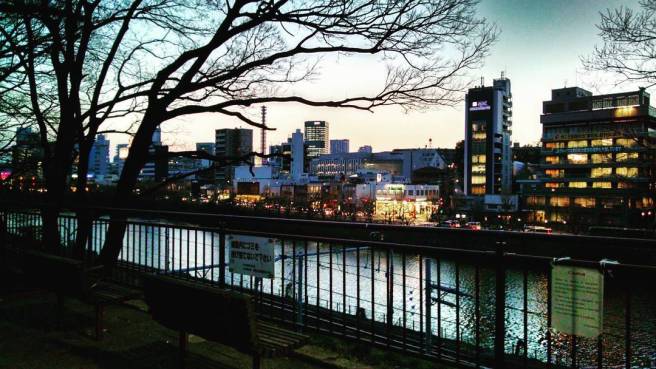 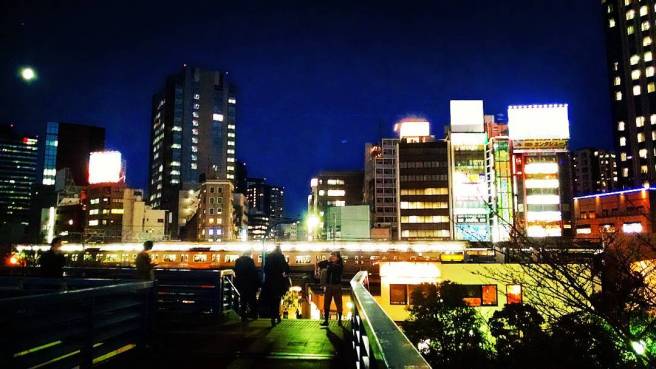 Too tired from training to write, luckily pictures are worth more words.

…from 2015. I’ve been meaning to start a writing/travel/et cetera blog for some time now, but always found an excuse/new podcast/ netflix episode to distract me from that promise.
Oh well, better late than never. Taking on a new project is best done at the start of a new chapter, and this moment is the definition of a new chapter.

Right now, I am drinking green tea and watching the sun set from my hotel room in Tokyo. This will be home for the next week while I finish Assistant Language Teaching training.

The decision to move to Japan didn’t happen all at once. Like a lot of major choices, this one happened in stages; first I was Just checking the website and Just sending for more information and Just going to a small informational gathering and Just going to a group interview and Just applying for a visa. Small commitments got bigger and bigger over time until at some point, I realized I had made up my mind to go, but I couldn’t look back and pinpoint precisely when it happened.  Soon after I had a housing placement, a board of education assignment, a visa with Hiragana, an arrival date. All of these were changed at multiple points, of course, but together, even when one was still in the air, the others served as a place holder to show that Things Were Happening, there was A Plan Moving Forward.

Which brings to mind: No matter how stressful this process was- moving out of my home of two years, saying good bye to friends and family and loved ones over and over, leaving a job I really liked- I dont think I ever second guessed this decision, once I made it. I can’t pinpoint the moment ‘maybe’ turned to ‘yes’. Maybe it’s just the jetlag and the travel endorphins talking right now, but but at some point, this became the next chapter I wanted.