Brandon Lee is buried near my hometown. Inscribed on his grave is prose that I have returned to again and again, whenever I face an ending.

“Because we don’t know when we will die, we get to think of life as an inexhaustible well. Yet everything happens a certain number of times, and a very small number, really. How many more times will you remember a certain afternoon of your childhood, some afternoon that’s so deeply a part of your being that you can’t even conceive of your life without it? Perhaps four or five time more. Perhaps not even that. How many times will you watch the full moon rise? Perhaps twenty. And yet it all seems limitless.” Paul Bowles

Perhaps this seems morbid. But I think, on some level, the fear of change almost always boils down to a fear- or at the very least, an acknowledgement- of death. We make the best with the time we have, because we do not know how much of it we have. Living well requires both ignoring the inevitable and acknowledging it.

I left Tokyo last week after a wonderful year. I spent months agonizing over whether it was the right decision, whether it was best to pull up roots and leave or stay and let them grow.

This year, I watched the sunrise from the top of a mountain and swam on the other side of the same ocean I grew up next to. Less poetically, I negotiated rental agreements, scolded children, paid taxes, and navigated new cities in a language I barely understood.

Walking the streets home from work, it was strange knowing the number of times I would walk through a train station or pass by a certain shop on my way home. It should feel limitless, but I knew the ending was fast approaching.

In many ways, it seems premature. I still have so many unanswered questions about my time in Japan. How do you wear a face mask without fogging up your glasses? How does my neighborhood support an average of 4.8 hair salons per block? (seriously, some of them must be a front for something, that isn’t economically feasible.) Why does everyone use a book cover? 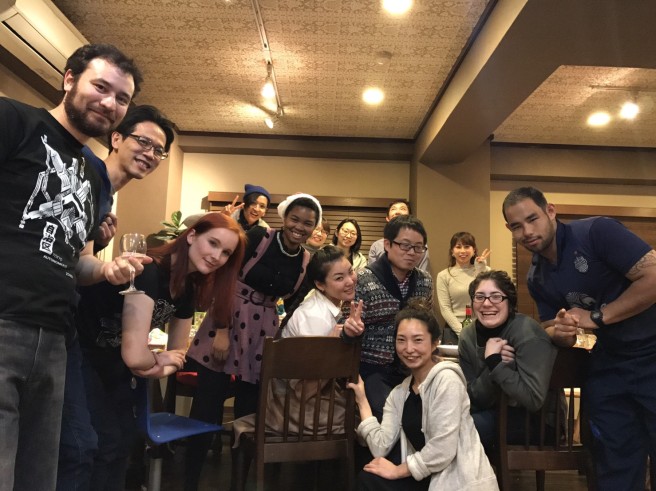 I’m grateful for the time I have enjoyed here and the people I have met. The day before I left, at my going away shindig, my roommates and friends surprised me with a photo album they had all contributed to. My contribution to the party was trying to make takoyaki while ugly-sobbing.

I had an incredible year. I met wonderful people. It’s hard to define the meaning behind that, and the courage that comes from being able to find community and meaning across the world. The beautiful thing is how ordinary it is.

“While the astronauts, heroes forever, spent mere hours on the moon, I have remained in this new world for nearly thirty years. I know that my achievement is quite ordinary. I am not ht only man to seek his fortune far from home, and certainly I am not the first. still there are times I am bewildered by each mile I have traveled, each meal I have eaten, each person I have known, each room in which I have slept. As ordinary as it all appears, there are times when it is beyond my imagination.” Jhumpa Lahiri, The Third and Final Continent

I write this wide awake late at night, my body still in sync with the time of a different country. Outside, I can see a crisp and clear full moon.