I try to help prepare the lunches at one of my schools, and this Thursday, I was helping to dish out a steaming cooked meal when I glanced. Orange chicken?

What a lucky day! I am a fan of the way my schools make fried chicken. I asked the other teachers casually what it was, and the response sounded a little bit like (I was only half paying attention as I passed out bowls) “quail.” 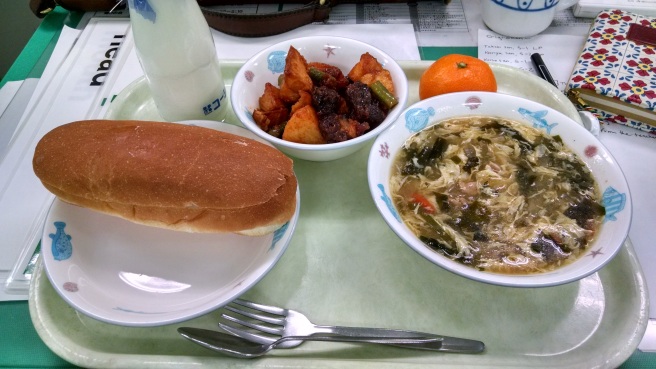 One of the teachers gave me a moderately concerned look. “Can you eat quail?”

This is one of my favorite schools to teach at, because they tolerate, even encourage my broken Japanese language skills. I’ve been slacking off on my studies lately, but I enjoy practicing around the office, and they’ve been kind enough to humor me. As a result, I try to be enthusiastic about everything. I was a little taken aback. I didn’t think I had ever given them reason to think I was a a picky eater. Even when we eat my least favorite school lunch, sakana- tiny whole fried or grilled fish, heads and all.

I’ve always made an attempt to seem enthusiastic about everything we eat at school. First, because it’s delicious,  and secondly because picky eating is just not a thing here. Students have told me (I generally eat lunch in the classroom with the students) that they hate a food, while they are chewing on it. Everyone eats the same thing for lunch together, family style, every day. Occasionally one or two younger kids will get finicky but for the most part, it’s the least picky I’ve ever seen children be about their diet. I now feel badly for my brief stage as a child when I refused to eat anything except lima beans and cheese.

So. I wasn’t sure why this would cause concern. They realized my misunderstanding. “Not Quail. it lives in the sea.”

Well then. I can understand their concern for my stomach. I don’t think whale meat is even sold in the United States, outside of a handful of Native American reservations. The United States doesn’t have a consistent party line on anything- it’s kind of our thing to disagree, really- but one of the few things I think most people agree on is that killing whales= bad. Perhaps even The Worst, except for nuking them.

On the other hand, I was curious. It was probably my only opportunity to have something I considered unethical, but without me making the conscious choice. Perhaps that absolved me a small amount? Oh, and it’s not like I had a choice: it was this, or no lunch at all. It was also a once in a lifetime opportunity, since the school nutritionist explained to me that they only serve it once in a year to highlight traditional Japanese foods. So, I tried it, feeling like maybe just this once, for a cultural experience, wouldn’t hurt too much.

And it was delicious. Dark purplish red, consistency and taste of a rich cut of steak, but a bit fattier, with a mild tangy hint of salmon. Honest to God it was probably one of the better things I’ve had in my life.

I taught at three schools whose school menus overlapped. So I had it again on Thursday.

And then on Friday.

A thrice in a lifetime opportunity.

It lead to some interesting conversations, once some of the teachers got over their initial concern for me. And eating it three times meant that I got to ask multiple people at different schools. It’s served once a year in schools to teach children about traditional Japanese foods, but one woman explained to me that she had grown up eating it- for a short period in Japanese history, it was the most affordable meat available. Because it was frequently served at school, a whole generation of Japanese children was raised on it, including the teacher who was explaining this to me. We had a nice conversation about the ethics of food, and where that overlaps with culture. I also got a suspicion of what “time period” she was talking about.

I filled in this conversation with my own Googling. The history of whale hunting in Japan is interesting. It’s been practiced for hundreds of years along the coastline, starting as early as 800 AD, but took on new importance in the last century. During reconstruction after World War II, meat was particularly scarce. Whale meat became one of the most important sources of protein during this time period; General MacArthur ordered that two US Navy tankers be converted to whaling vessels to provide the population with another source of fresh meat. It was used, among other things, in elementary school lunches. The current market is controversial; whale meat has fallen out of fashion, but is still a nostalgic food for many Japanese people, despite the falling whale populations globally.

The intersection of ethics, food, and culture, and the discussion surrounding it, makes me uncomfortable, mostly because it frequently misses the point. I don’t think my eating whale once, or even three times, is going to make too large a dent in the global population, even if many of them are endangered. Whales are extremely intelligent, but so are pigs. Eating whale has a lower carbon footprint than eating beef, but one makes my gut queasy and the other strikes me as completely natural. A guinea pig is a pet in some countries, a dog is a dish in others.I got in an argument with my mother after telling her, my defense being “well, we (Americans, not my family) eat foie gras, and veal: whats the difference?” So much of our morality is influenced by our culture. And that’s frightening, because you want to think that ethics are not arbitrary and that something as powerful as a gut reaction is trustworthy and right.

I am also not a relativist. I think, even accounting for different cultural backgrounds, some things are just innately more correct. I also think that my culture has not influenced me in these decisions, that I have only used objective reasoning and logic to come to my conclusions, void of history and context.

I guess right now is the exploration of what imprint my culture has left on me, with and without my knowing.